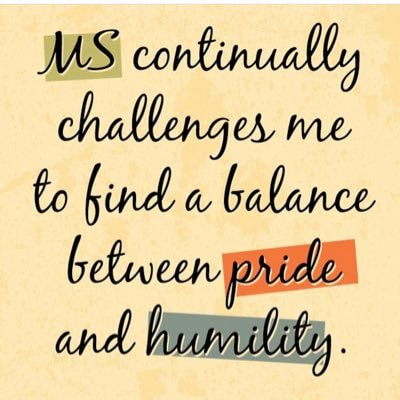 It seems logical that the first emotions I should have experienced after my MS diagnoses would have been those of fear or self pity. But it was one of relief; knowing that MS does not kill you and that, although there's no cure, there are medications available that can slow down progression or perhaps even help you into remission. My Neuro's first words that "there's never been a better time to have MS were soothing, if not outright encouraging.

After he filled me in on the "aggressive" drug therapy he had planned for me, he said that one of the potential "side effects" that had been associated with the drug was suicide ideation. He had doubts that it was caused by the drug, but rather something were thoughts that crossed the mind of many of the patients after an MS diagnoses. And that I should let him know immediately if I were to have those kind of thoughts. I quickly assured him that I would never consider it, regardless of how bad things got. He explained that over the years, 4 of his patients had ended their life after diagnoses. Then, with tears welling in his eyes, he went on to explain that 2 were very recent. I wanted to hug him, but didn't. He retired about 6 months later saying he need to stay home with his wife who had health issues, but there's little doubt in my mind that the suicides he mentioned had a bearing on his decision.
It's been 4 years since my diagnoses. The initial diagnoses was RRMS, but after 9 months of rapid progression, with no remissions, it was upgraded to PPMS. My drug therapy was changed to Ocrevus, which has slowed my progression to a nearly dead stop. I still experience some progression just before my regular by yearly infusion date, but I've been able to deal with it.
After four years, I can truthfully say that my biggest battle has not been with depression and I have never had even the slightest thoughts of suicide; my biggest battle is trying to keep my feelings of guilt at bay. The feeling that I've let others down because I can physically "be there" for them like I used to be, along with feeling that I'm now a burden at times, especially to my wife who has found a way to handle this all remarkably well.
In my communication with others, I've learned that the feeling of guilt is very common amongst patients with MS.
In my communication

Why must someone always be to blame? It seems that as soon as we're born when anything went wrong we were taught


to figure out who was to blame. And too many times we end up pointing the finger at ourselves.
So it stands to reason when our health fails, our first thought is to figure out who's to blame. Is it our diet or lack of exercise?
If we can change this pattern that's been so engrained in us, it can bring us so much peace. But that's so much easier said than done.

Want to learn more?
﻿﻿Why having a coach makes sense

​So many of us get "stuck in today" and only have a general idea, or general plans on how tomorrow could be better. I've been there. I felt like the key was just to work hard, trust the system and hope it paid off. It didn't work for me. It doesn't work for most of us anymore.  As Seth Godin says "the system is broken". We want more out of life, and the sooner the better, but it can be a muddled path.

How Does a Coach Help?- A coach will provide the tools and guidance to help you plan for, and make changes that allow you to take control of your life and plan for your future. And with the help of a coach, you'll see positive results sooner, rather than later.
​
Why not start now?

I'm currently offering a free, no obligation, introductory coaching session. We'll meet in person over coffee, or talk by phone for up to 30 minutes. The conversation will be casual and completely confidential. Your information will never be shared or disclosed.
​
Benefits:
Let's Talk
OrganicPositivity